However, before G2 Esports face their long-time rivals Fnatic, they will fist battle against MAD Lions in a match that will surely contend for the match of the week.

Without further ado, let’s get right into the prediction of a match that has all the ingredients to be the match of the week G2 Esports vs MAD Lions, the reigning LEC champions versus the team that wants to regain their LEC crown. 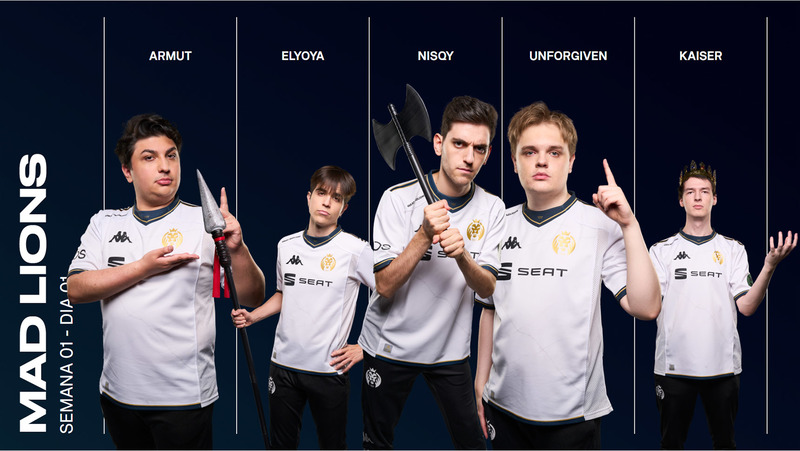 G2 Esports versus MAD Lions is always a game you must watch if you are a fan of competitive League of Legends.

After adding Nisqy to their roster MAD Lions look revamped and are once again a title contender, after a disappointing performance in the LEC 2022 Spring Split where the organization missed the playoffs for the first time in their history.

However, they are coming from a hard loss versus Excel, where Excel dominated the early game and won the game in just 21:07 minutes, the shortest game of the Split.

Coming from such a hard loss MAD Lions will for sure want to bounce back and what better way than to defeat the reigning LEC champions, and the team that is seen by most as the favorite to win this LEC Summer 2022 Split.

G2 Esports also had an unexpected setback last week, as they lost versus Team BDS, a game most people thought that G2 Esports were the heavy favorites and that they weren’t going to have any problems in beating the French organization.

MAD Lions early game is one of the best in the league. Despite being stomped by Excel in the early game last week, Excel head coach Nelson said in a podcast that in his opinion only G2 Esports, MAD Lions, and Excel know how to play the early game and that Rogue also knows it but in a different way than the other three.

The team has an average gold lead of 292 at the 14-minute mark, which is not impressive but you have to factor in their loss versus Excel last week which dropped their early game numbers significantly.

When it comes to the first tower they have a 40%, and have the same percentage of first blood at 40%.

However, they are still a top-three team in the LEC when it comes to the early game and how proactive they are.

Nisqy plays a very heavy roaming style, which together with Elyoya allows both of them to find plays in the side lanes, creating advantages for MAD Lions.

They are not afraid to pull the trigger on risky plays and more often than not come out on top of those plays.

MAD Lions continues to be one of the best teams in Europe and even the world when it comes to team fighting. If you get to the late game even chances are MAD Lions team fight ability will lead them to victory.

UNF0RGIVEN and Kaiser have also been performing well in the bot lane, and there is an argument to be made that currently, they are a top-three bot lane in Europe.

In the drafting department the team is not as flexible as G2 Esports, and UNF0RGIVEN and Kaiser, despite their good performances so far, have only played with two champions.

But they are not a bad drafting team in my opinion.

Now moving on to G2 Esports.

The LEC champions have been looking really strong so far, with their performance versus Team BDS being the only outlier.

G2 Esports early game is probably the best in the region, as the team has shown to be very proactive in the early stages of the game, and is able to build substantive leads in that period of the game.

With an average gold lead of almost 1k, and a 200% win rate when ahead at the 15-minute mark, this shows how good G2 Esports is at getting advantages in the early game, and being able to increase that lead in the mid-game.

However, they have a low first tower rate of only 40%, and the first blood percentage is even lower at 20%.

Similar to MAD Lions, G2 Esports is not afraid to pull the trigger and Jankos doesn’t mind sacrificing himself for his laners if that means his team will have a better shot at winning the game.

The polish jungler is having an amazing Split so far, and his partner in crime Caps is playing at an MVP level.

The top father Broken Blade is further cementing his place as the best top laner in Europe, and Targamas and Flakked have proved a long time ago that they are the real deal, and one of the most solid bot lanes in the West, with Targamas having a champion ocean.

When it comes to the draft, G2 Esports have been drafting pretty well, except for their draft against Team BDS, that one doesn’t count.

They are able to play unconventional compositions and make them work. The squad is also very good at understanding the win conditions of their composition and playing towards them.

I think G2 Esports enter this match as the favorites, and I think most of you guys will agree.

They have looked extremely good this Split, and they have already beaten title contenders such as Rogue, Excel, and a good team in Team Vitality, I wouldn’t call Team Vitaly a title contender at least not yet.

MAD Lions will have to play much better than what they did against Excel if they want to have a chance at winning this game.

I don’t think MAD Lions will get stomped twice in a row, and we will see a much better MAD Lions than the one we saw last week.

However, I still think G2 Esports is just a better team right now. Their players are performing incredibly well individually and as a team, they are very cohesive.

One thing is certain, this will be a great game to watch.