As League of Legends welcomes yet another iteration of Summoners Rift, the new pre-season heralds quite a shakeup for the established meta. As usual, the season’s end means that ranked rewards will be distributed by December 16 for all regions, except for China, where the deadline is extended until patch 11.24. Breaking up the balance of the elements, new dragons of flesh and steel (and gaseous ooze) swoop into the dragon’s lair. A fair slew of balance changes, like the long-awaited Caitlyn update (for all the Arcane fans!), hits the Rift. The patch also introduces significant additions to the shop, adding powerful – and that might be quite an understatement – items for most champion roles.

Following perhaps the most ambitious promotion campaign in the lore-heavy series Arcane, Caitlyn revamp finally hits the Rift, bringing the champion up-to-date to the modern League’s look. Finally, the Piltover officer no longer sticks out like a sore thumb on the grassy plains of the bottom lane. The new update also graces the sharpshooter with a new VA: now the high and mighty police lady has got a refined British voice fit for royalty, cementing her aristocratic origins. 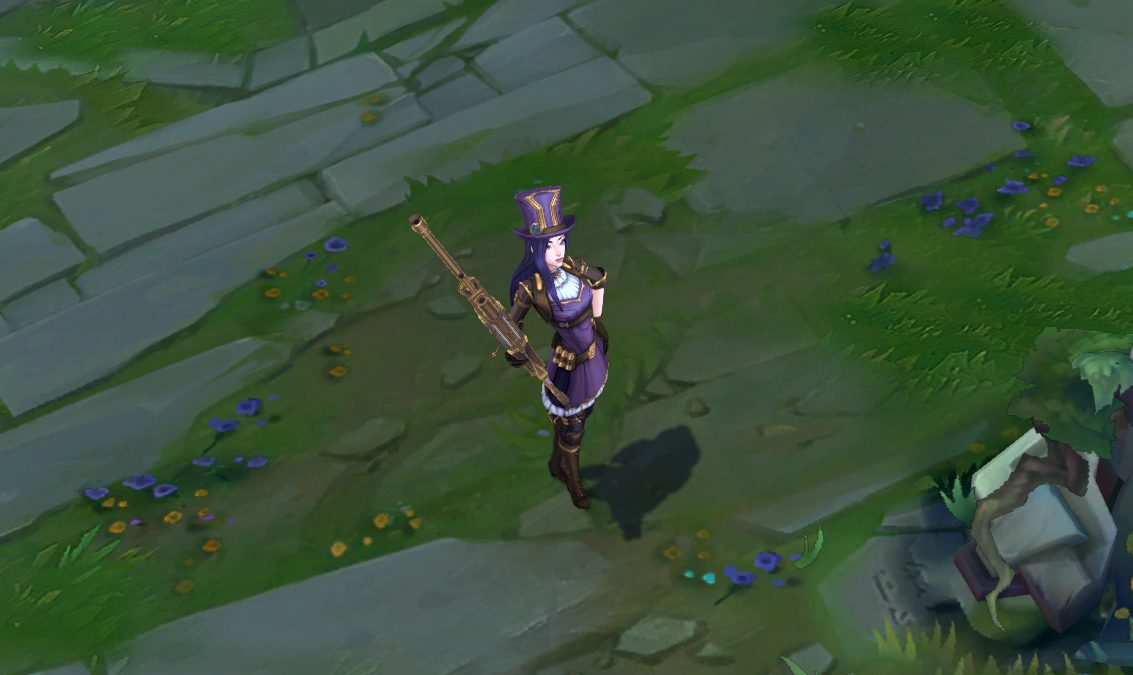 However, while the updated visuals look amazing, the player base is surprised that the promised “purely visual update” turned out to severely affect the champion’s playstyle. It turns out the complexity of Caitlyn’s famous (or infamous for some) animation cancels, and combo buffering was hit by a severe nerf. The #1 Caitlyn player in North America, xFSN Saber, demonstrates the simplification in his fittingly sarcastic video:

However, not all is lost as Riot is assuring they’re working on the issue. In a recent Reddit post, Riot Rovient clarified that this change has been an unfortunate side effect of cleaning up Riot’s infamous spaghetti code. The Riot employee promises Caitlyn will receive more attention in the patches to come, possibly bringing her up to her former glory.

The pre-season introduces a multitude of powerful items for most roles. From an anti-burst tool to an incredible team-wide damage increase, the new artifacts will surely receive more attention from the devs in the recent future. Hurry up and check them out fresh out the oven before they get stale! 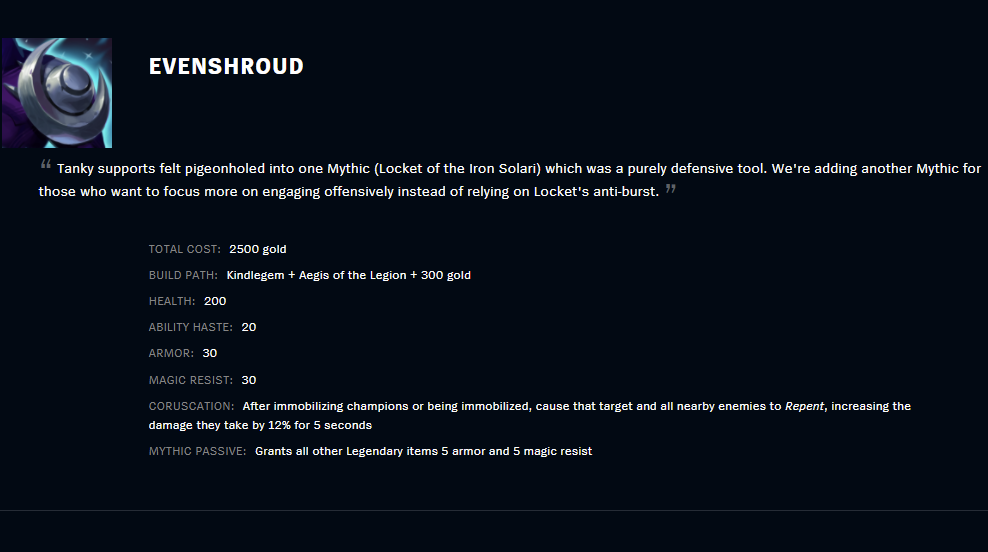 Yes, you read that right – a 2500 gold item that grants a debuff on a CC’d enemy that your whole team – and even objectives, neutral or not – benefit from. What’s crazier is that the effect is Area of Effect as well – so you better run in the woods when you see that Thresh winding up his hook, or your team will be in big trouble.

But what has the entire community captivated is yet another tool – and that should tell you a lot about its power level. A lethality-based item, Axiom Arc is a non-mythic that refunds 25% of your total Ultimate ability cooldown if your target dies within 3 seconds of last taking damage from you.

And while clearly intended with AD Assassins in mind, the Axiom sometimes results in silly interactions hardly foreseen by the devs. Watch Karthus expertly demonstrate the frailty of life as he casts 2 of the longest cooldown Ultimates in the game in 8 seconds. If only he could’ve gotten a Pentakill!

Continuing their push for fairer, less “snowbally” matches, Riot team introduces a new objective mechanic onto the Rift. A losing team will now enjoy more possibilities to come back into the game due to the system which allows you to collect additional bounties from turrets or Epic neutral objectives if you happen to fall down into a gold deficit. The bounties will be highlighted on your minimap in gold – and if you manage to secure one of these gilded objectives, you and your mates will receive a team-wide gold payout that depends on how big the gold deficit you are in.

Initially thought to be a single random objective marked Kindred-style, the new bounty system turned out to be a simple gold bonus for taking any objective on the map. This unexplained faucet of this feature – or a last-minute change from the developers – raised some questions within the community. Many argue that, unless the gold lead is absurd, the winning team stands no chance of guarding every objective on the map simultaneously, making being ahead paradoxically punishing.

However, it seems that this new feature is currently bugged out – Reddit users report winning teams enjoying the objective bounties that the losing teams are intended to have instead. It is unclear what causes this, but rest assured, Riot is already on the case.

Possibly the most significant change in years, the new patch introduces two powerful new dragon types to splice up the meta. 11.23 introduces cyber-dragons to the already established cast on elemental drakes, focusing more on the mid-to-bottom river segment.

The new dragons offer unique changes to the map when they’re about to spawn the same way their older brothers already do. For instance, when a Hextech Dragon is about to spawn, the map becomes covered with long-range, one-way travel gates – think Bard’s gateway on steroids.

Besides their effect on the map layout, the main focus is the buffs they grant, and for persistent and lucky teams – their souls. Thankfully, they are nothing to scoff at: slaying a Hextech Drake grants your team 5 Ability Haste as well as 5% attack speed, while Chemtech Drake buff sports an increase to the damage you deal to champions that have more health than you, up to 5% per stack. As for their Souls, the Hextech Soul makes your attacks strike chain lighting at your enemies, while Chemtech Soul offers an extremely powerful mechanic of resurrecting your champion temporarily upon death. 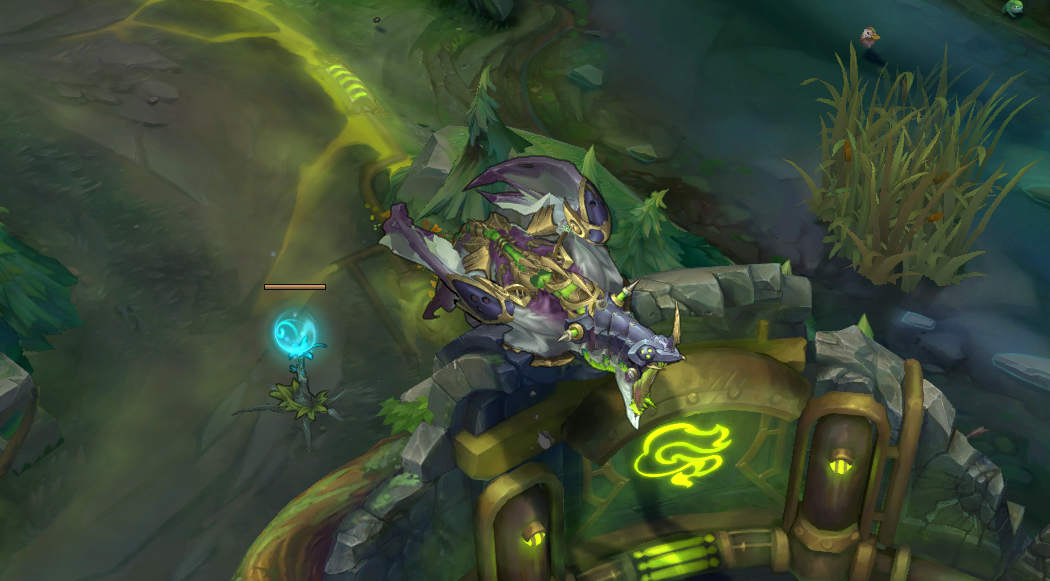 The abominable Chemtech dragon seems to be incredibly counter-intuitive to Riot’s design anti-snowball philosophy – its ability to terraform the Rift to replace all the jungle bushes with a gaseous cloud that conceals any champion that steps in them can make the losing’s team life a total nightmare. Every concealed champion can not be detected by anything but a Pink Ward or standing near them – green Wards won’t work! Once you lose that map control, it will be an uphill battle to take it back as long as the Chemtech Drake is here.

The Chemtech Dragon also brings multiple likely unintended interactions with the existing champs. Although not explicitly mentioned in patch notes for nerfs, both Rengar and Qiyana dropped nearly 2% in winrate ever since the update came out. The reason for that is simple – their kits rely on bushes, and now these bushes have a chance to be taken out by the noxious gas.

However, it doesn’t end here – the Chemtech Soul literally doubles the number of kills you have to score to Ace the enemy team if they happen to hold it. And, unlike the similarly designed Sion’s passive, the Chemtech granted “Zombie state” allows you complete control over your champion while you’re in it.

With all  these factors combined, it is no wonder that the poor Chemdrake became a focus for the community’s criticism: a scathing post on the League of Legends subreddit gathered more than 3k upvotes decrying Drake’s design.