Without further ado, let’s get straight into the DWG KIA vs Hanwha Life Esports prediction. 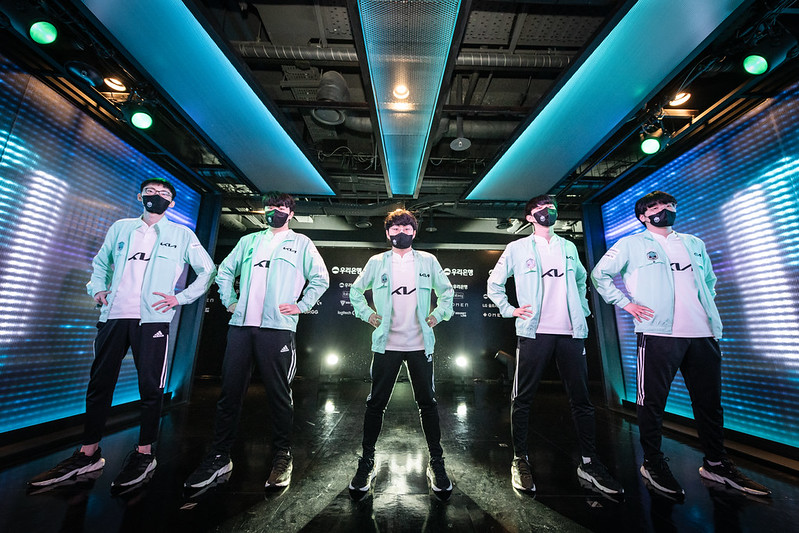 DWG KIA comes into this series as the heavy favorites, because they have been playing well in the last weeks, despite coming off a loss against DRX.

It also helps that their opponent is Hanwha Life Esports probably the worst team in the leagues, tied with Nongshim RedForce, because even if Fredit BRION are tied with them in the standings they have performed much better in their last two games.

This is the perfect series for DWG KIA to bounce back from the loss they sustained at the hands of DRX, who seems to have their number.

The 2020 World champions have the third-best early game in the league, despite still being miles behind T1 and Gen.G early game.

With an average gold lead of 699 at the 15 minute mark, a 51.9% first turret rate, 48.1% first blood, and a good gold differential per minute, you know this team is a decent early game team.

But late game is the name of the game, and DWG KIA has also shown they can perform when it comes to the later stages of the game.

As a team, they are one of the best when it comes to team fighting, being able to play around their vision to find some good engages, and perfectly executing the front-to-back team fights.

In the draft department, DWG KIA can play basically everything, but that doesn’t mean they find success with all the compositions they run, and sometimes because of the fact they can have so many flex champions it ends up hurting them as they go away from the style that suits them the best, and gives them the best chance to win.

If ShowMaker is on a roaming mid laner, Nuguri is playing weak side top, and you play towards the bot lane with deokdam having a late-game carry, I feel like DWG KIA as a chance to beat anyone.

They have been improving week after week, and apart from T1 and Gen.G, only DRX seems to be able to beat them.

As for Hanwha Life Esports, I’m going to be honest there isn’t a lot of praise I can give to them.

Their early game is the worst in the league, it’s not even worthy to pull their stats.

In the draft they arent flexible, and most of the time don’t know how to execute their compositions.

Macro game is bad, most of the time they don’t pull the trigger, and either are very passive or too aggressive.

DWG KIA is also by far the best team fighting team, and their macro game and overall decision in the late game are much better.

I would be very surprised if Hanwha Life Esports took a game from DWG KIA let alone win the series.

DWG KIA shouldn’t have a hard time defeating Hanwha Life Esports and maintaining their third place in the standings.