It’s probably the most important week of the three remaining, so be sure to tune in to the games.

T1 vs ⁠KT Rolster will open up the week and promises to be a very interesting series.

Without further ado, let’s get straight into the T1 vs ⁠KT Rolster prediction.

If you are feeling lucky and want to make the most out of your predictions, make sure to check our Lol betting guide. 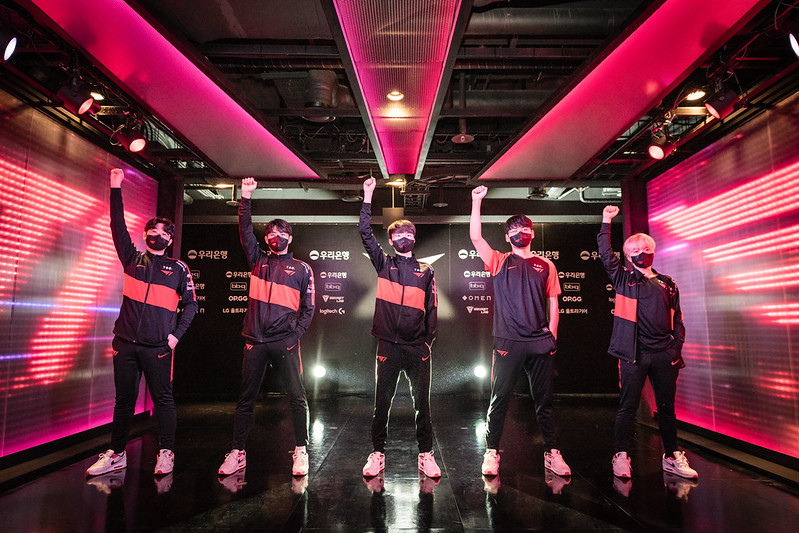 Both teams reach this series on winning streaks. T1 is on a seven-win streak, while ⁠KT Rolster has been looking much better as of late and managed to win their last four series.

On paper, T1 is the heavy favorite coming into this one, but the team has been losing games to teams such as Fredit BRION, Hanwha Life Esports, and Kwangdong Freecs

While KT Rolster hasn’t dropped as many games as of late and has defeated teams such as DRX and Kwangdong Freecs in a very clean way.

When it comes to the stats, especially in the early game T1 is by far the superior team. With an average gold lead of 1k at the 15 minutes mark, 73.3% first tower rate, and below average first blood of 40%, T1 early game is the second best in the league.

But we are in a late-game meta, at least in the LCK.

Recently T1 was dropping games against teams they shouldn’t, and sometimes they overextend or play like they are 5k gold in the lead when the game is even, leading to them losing skirmishes and giving the other team the advantage.

However, when T1 brings their A game the only team that seems capable of stopping them is Gen.G.

Against Fredit BRION, they lost game one but dominated games two and three, despite having a bad decision on game three that could have cost them the game.

Zeus is still by far the best top laner in the league and will give T1 a gold lead just by winning his lane.

When on Lee Sin, Oner can carry a game basically by himself, finding a lot of impact in the early game, and even in the late game, he can find that engage that wins them the team fight.

T1 drafts have also not been the best recently, with Oner not playing Poppy, and Gumayusi just not being as good in this meta, that has a big impact when it comes to drafting.

But the team is still very flexible, and even Faker is more on utility mid lanes in order to impact the map more, especially the botlane.

When T1 get an early game lead they will suffocate the other team with good cross-map plays, playing excellent macro play, finding great engages, and not being afraid to pull the trigger in the team fights when an opportunity arises.

As for KT Rolster the team was been impressive as of late.

Their early game looks much better, despite still being miles away from T1 early game.

Vicla continues to impress with his roaming mid laner style, Aiming is a top-three ADC currently and Life has also been having a very good split.

In the late game, this team shines on the team fights, doing a great job at protecting their main carry Aiming, and finding some great engages.

Drake control is another thing the team has been very good at, reaching the Drake soul at an early point in the game.

When it comes to the draft, KT Rolster is not as flexible but they are good at executing the comps they normally run.

Despite all of that, I still see T1 as the best team. Yes, they might drop a map, and KT Rolster has all the tools to make this series a very interesting one.

But T1 as a team is still superior I’m my opinion, and it would be a surprise if KT Rolster can actually win this series.

However, this is League of Legends so anything is possible.